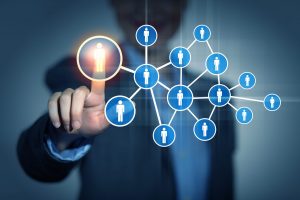 2001 and newly self-employed as an L & D Freelancer I remember pitching up to a networking event at local hotel and joined the group – mainly men – already there. Standing with the glass of warm wine and cold sausage roll combo, a gentleman approached me, told me all about his business, got to the end of his spiel and handed me his card – which I couldn’t take without some acrobatic activity. His eyes were already scanning the room for his next victim, while saying in that pretend-interested way ‘So what do you do?’. ‘Belly-dancer’ I said. ‘Oh’, he said. ‘How interesting – sorry – I must just catch that chap from the council…’, as he excused himself and moved on. Press Repeat.

Fast forward to 2017. I was asked by a newly self-employed friend for moral support at a networking event. ‘Bound to have changed’ I thought, so off I trot full of hope and business cards.

Arriving in the car park, I noticed that most of the other people arriving were again men – why so few ladies? ‘Still’, I thought, ‘the format will be different’. As I entered the venue I was immediately confronted by a gentleman who thrust his business card at me saying ‘Hi, I’m xx – I make work-wear’. Without waiting for a reply, he moved on to the next person coming into the room and repeated the performance. You’ll think I’m making this up. I’m not.

Over lunch I was at a table with five other people, mostly from commercial organisations. Two of them – very nice people – obviously on a jolly, but with little interest in networking. One chap suggested we do a round robin with the business cards, and the one other self-employed person at the table spoke endlessly about her business and tried to sell stuff that no-one wanted. Still, lunch was nice, and they had a ‘turn’ on.

Shortly after this event I was invited to a ‘women only’ networking group who meet around once a quarter. Instinctively I felt that in 2017, with so much emphasis on equality, and the urge to remove the glass ceiling, and where women are encouraged to ‘lean-in’, that women only groups were a regressive phenomenon. Surely there is so much to be gained from having access to different perspectives – not to mention opportunities. What does it say about women that they feel the need to cleave to each other in single gender groups? Isn’t this exactly the image we’re trying to dispel? Out of curiosity I went along, prepared to be disapproving.

The first thing that struck me was how welcoming and inclusive the environment was. The hostess introduced herself and others in the room, asked me what I did and connected me to other experienced members of the group. The atmosphere was warm and buzzing, and the tone of the conversations was supportive and sharing in nature. Anyone who is self-employed knows how lonely it can be and how important is it to connect with like-minded folk.

There were key people in the room who sat with small groups, and very informally facilitated the conversation so that everyone contributed. There was genuine interest and a willingness to give – information, introductions, open sharing of experiences and offers of help that I had not experienced in other networking settings. People actually asked me questions, and suggested ways they might be able to use our business – or knew someone else who might need our packaging solutions.

Reciprocity was rife! I was desperate to help someone else! (oh and we had a great lunch!)

So how does the magic happen? I don’t think it really matters whether it is a single-gender or a mixed group. I believe what really matters is that people know what great networking looks like. Having a mindset which is about inclusion and giving is a good starting point. One size does not fit all when it comes to networking – as in life we all kiss a lot of frogs – so it is with networking. Find the right group(s) for you. Be selective. Start local. Don’t go the opening of an envelope. But when you do choose the right one (virtual or real) think about what you can give not just about what you want. Be prepared to listen – a lot. Know what to say when people ask you about you. Tell them why you do what you do – not just what you do. People like passion.

Cost is another consideration – many networking groups charge an annual fee. You have to consider whether that’s a good investment for you, and what you get in return. It’s worth remembering that there are lots of great groups who charge nothing or only a nominal fee to cover the cost of refreshments.

If it’s the right one you will enjoy the experience, make friends as well as connections, you’ll feel supported, get ideas and tips – oh and probably have a good lunch! Magic!

Follow the link for more networking advice from the FSB